Like most members of the alcid family, thick-billed murres have short, stubby wings, and feet that are located far back on their bodies. This allows them to swim rapidly in pursuit of fish, squid and shrimp, and dive to depths of 180 metres! Like penguins, murres use their wings to “fly” quickly through the water. Flying through the air, however, is a challenge for these birds – their narrow wings provide little lift for take-off and their tails are too small to give effective stability and steerage. Although they can fly rapidly once airborne – up to 75 km/h – they must trail their large webbed feet behind them as rudders to help steer, and often must make several attempts to land on the narrow cliff ledges where they nest.

Thick-billed murres nest by the thousands, in impressively-sized colonies on cliff faces that are inaccessible to terrestrial predators. Unlike other alcids, they have very reduced territories – each bird only defends the area it can reach with its bill from where it sits on its egg. Stiff competition for nesting sites on a limited amount of suitable cliff face means that as many birds as possible cram their nests into one area – in fact, densities may reach 10–30 eggs per square metre! Fortunately, murre eggs vary greatly in colour and mottling, from green to pinkish- otherwise parents might be unable to recognize their own egg. During the four-week incubation period, males and females take two-day turns sitting on the egg while the other parent feeds out at sea. Parent birds have a “brood patch” of bare skin on their bellies which is placed against the egg to transfer as much heat to it as possible. Murre eggs are round at one end and pointy at the other, a unique shape that ensures that if they are bumped accidentally, they will roll around in a circle instead of falling off the cliff. Cliff life does present many hazards, however, as storms, cold weather and disturbance by humans can cause both chicks and eggs to be blown or knocked off their narrow ledges, killed by exposure, or left undefended to be snatched by predatory gulls. Many more murres are hunted for their meat, drowned in fishing nets, or die as a result of oil spills. Hunting and egg-collection in the 19th and early 20th centuries caused a drastic drop in murre populations, which are only now showing signs of recovery. Thick-billed murres may live for at least 25 years, but do not reach maturity until five years of age.

After only three weeks of life, a thick-billed murre chick must plunge into adulthood- right off its high cliff ledge and into the cold Arctic Ocean. Although they have fully waterproof feathers, chicks cannot fly when they leave the “nest”, and simply splash down onto the water, where they are joined by their parents. This dive usually occurs in the evening, to avoid the predatory gulls that swoop around the colony by day. On their first day after leaving the nest, the chicks begin an incredible migration southward. First they swim up to 1000 km and then, once their flight feathers have developed, fly yet further south to their wintering grounds in polynyas or beyond the limit of winter sea ice. Adults also moult during the first part of this unique and remarkable journey and, during this time, are completely flightless. There are several different populations of thick-billed murres in the Arctic; those in the High Arctic usually winter to the west of Greenland in polynyas, or areas which remain ice-free throughout the winter, while lower-arctic populations move south to the coast of Labrador. 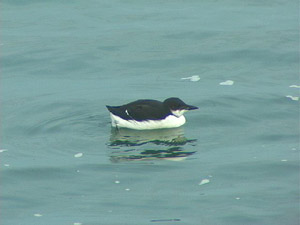