Ravens are one of the most common birds around Arctic communities, and one of the few species that remain in the Far North throughout the winter. Indeed, in many areas they represent the only land species, other than people and dogs, that can be easily seen during the winter. They therefore figure largely in Inuit stories and experience, although they are less important to Inuit mythology than to the native peoples of the Pacific coast.

The Inuit have mixed feelings about ravens. The birds are in some ways a nuisance, attacking carcasses left unguarded and stealing scraps of food. On the other hand, they are interesting and amusing to watch, especially in the winter, when so few other animals are around. The Inuit respect the raven for its ability to survive in the winter, when almost all other birds have migrated to the south, and cannot help noticing their playful, sociable nature as they swoop and call in pairs or flocks. They also appreciate the raven’s intelligence and its ability to obtain food in difficult circumstances, as demonstrated in the following account. An Inuit hunter and his companion had killed several caribou. By the time they had butchered some of them it was too dark to take them home by dog team, so the two men left the caribou and returned to retrieve them the next morning. The hunter tells of how the ravens had taken advantage of his absence:

Before we started to butcher the ones that we had not completed, I told my companion, that I always thought ravens were not as smart as me when it came to game animals. As it turned out they knew a lot more, they got into the meat through the wound of the caribou. My companion found that to be funny and laughed (IOHP 414).

He mentioned that the ravens had poked through the wound to eat the layer of back fat, the most prized part of the caribou- an annoyance to the hunter, but also a mark of intelligence that was to be admired in the tricky black birds.

The raven does not always get its own way, however. One Inuit legend explains how a raven wanted to marry two beautiful female geese. They protested, saying that he would not be able to keep up with them on their long flights across the ocean, but he was persistent and the geese finally agreed to the marriage. On their next migration, the devoted raven accompanied the two geese. After a few hours of flying, however, he grew tired. The geese rested on the water, but since the raven was unable to swim, he begged his wives to support him between their wings. The geese carried him along good-naturedly for a while, but soon grew tired of his weight. Suddenly they let go of his body, and he plunged headlong into the sea. There he was transformed into a little black mollusk, the pteropod, which flaps along underwater and is known as tulugarnaq, the little sea raven (Seidelman and Turner 1993; Randa 1994).

One of the notable characteristics of tulugaq is its ability to live in extremely cold environments. Around the beginning of April, after surviving the harsh winter by scavenging, ravens leave human settlements and fly off to nest on remote, inaccessible cliff faces. Eggs are laid and young hatch out in the Arctic “spring”, when snow still covers many areas and temperatures can drop as low as -30°C. Although the severe cold sometimes causes their eggs to crack, the young seem to suffer no damage and hatch out normally (Randa 1994).

Tulugaq distinguishes itself from other birds by its walk, which consists of “jumping around”, rather like a snowy owl. Its flight is even more remarkable; it combines fast directed flight with spins, loops, and dives, often orchestrated between two or more birds. It eats everything from berries and scraps of carcasses to lemmings, ermines, and even dung. In the winter, ravens often follow polar bears, scavenging the carcasses left by them. The bears thus become accustomed to the harsh calls of the ravens. Inuit hunters took advantage of this fact and imitated the raven’s sharp “Caw!” to encourage their dogs when pursuing a bear (IOHP 058; Randa 1994). Raven feathers were sometimes used to feather arrows.

The raven was seldom eaten by Inuit, being hard to catch and having too many other associations to make it comfortably edible. It had many symbolic uses, however, in addition to its mythological importance. When parents or grandparents wanted a child to grow up to have long hair, or particularly black hair, they would place a cap made from the skin of a raven on the baby’s head as soon as it was born (IOHP 414). A newborn boy’s first clothes were made of raven skin in order to help him grow into a successful hunter, because “the raven always finds things to eat”. Such clothing could also make a child resistant to cold weather. A child’s first set of clothes, when removed, was sometimes placed in the nest of a raven. The raven also had power over the winds and ocean; to calm a strong wind or to hasten the development of the ice on the ocean, one could kill a raven and throw it into the sea. Perhaps this related to the perception of the raven as a completely terrestrial bird who hates water.

Tulugaq appears in many Inuit legends. One describes how he first acquired his black coat after a disagreement with the snowy owl. Another tells of an argument between the raven and the fox. A long, long time ago, when the world was young and light had only just been created, the fox argued with the raven over the new situation. The raven, who sees better in the daylight, was in favour of having sunshine all the time. The fox, however, prefers to hunt in the obscurity of dusk, and wished for the light to go away. In the end, a compromise was reached and time was divided into dark and light periods. 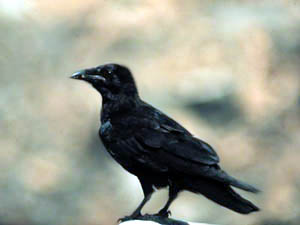