This is a typical sculpin, with large, fan-like pectoral fins and big eyes located high on a flat head. One short “horn” in front of each eye and two behind the eyes gives this fish its common name. Its mouth is large and the upper jaw protrudes slightly. Its first dorsal fin is spiny, while the second is soft rayed. Shorthorn sculpins are dark green or brown above with a yellowish underbelly. Variable dark bars and mottling are always present.

This sculpin has an extensive distribution in the Arctic and North Atlantic oceans and occurs in the waters off Alaska, in Hudson Bay, and around Baffin Island. Its range continues south along the coast of Labrador and Newfoundland to the Gulf of St. Lawrence. It is also common off the coast of Nova Scotia and in the waters of Greenland, Iceland, Siberia, and northern Europe. The shorthorn sculpin is restricted to marine environments where it prefers cool water with weedy bottoms. They are sluggish bottom dwellers, found to depths of 37 metres. When disturbed, these fish use their large pectoral fins to move slowly and for short distances. They are voracious, opportunistic predators, consuming crabs, shrimp, sea urchins, herring, small cod, marine worms, amphipods, and gastropods.

Although spawning varies with location, mating generally lasts for about one month in early winter. Each pair chooses a shallow, rocky-bottomed area with a V-shaped crevasse where the female sheds anywhere from 4,000 to 60,000 adhesive eggs. The male remains nearby to protect, fan, and clean the eggs for three months until they hatch, while the female returns to deeper water. The mortality of shorthorn sculpin eggs is low because of the male’s guarding behaviour. Juveniles remain near the bottom, for protection. Sexual maturity is reached between the age of 4 and 8 years and the average life span is 15 years. Death is often due to infection by parasitic nematodes.

The shorthorn sculpin is of little economic importance, but was once used as bait for lobster traps. Recently, these fish have been used for biological research, providing insights into cell structure and the effects of pollution. 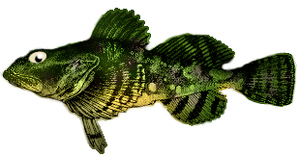