At first glance, some of these animals look rather like tiny plants, with minute “leaves” growing on branched stems. The leaves are actually the tubular casings of individual animals, living together in colonies that are connected via the “stems.” The colonies of other bryozoans species can take on different shapes, such as flat mats in which the individual tubes are spread out over the base.

The tubular casings of bryozoans are often hard and shell-like. Each individual collects its own food, using a retractable fan of tentacles that are covered with tiny hairs. When projected from the top of the tube, the tentacles filter small particles, such as algae and tiny worms, from the water. The captured food is then passed into the open mouth. The internal organs consist largely of a U-shaped digestive system – food enters from the top of the tube and is then ejected via the anus, which is situated to the side of the fan of tentacles. It is this location of the anus that gives rise to the group’s other scientific name, ectoproct (ekto=outside; proktos=anus). Circulation and excretory organs are absent.

Because of their small size, bryozoans are not very conspicuous, but the group has more species than most invertebrate groups. Although most bryozoans are marine, there are 50 freshwater species throughout the world. At least three species inhabit arctic freshwaters. Cristatella mucedo is a branched individual, but the whole colony is embedded in a jellied mass, with the openings of the tubes protruding from the surface. Fredericella sultana has a plant-like appearance, with many branches. These animals exist as aggregated colonies on solid surfaces, such as rocks.

Byrozoans are able to reproduce in several ways. During harsh environmental conditions, colonies form modified, unopened individuals called statoblasts. These statoblasts are resistant to cold and survive the freezing waters while the rest of the colony dies off. When the water warms above 8 °C, each statoblast develops into a functional individual, with the ability to sprout up to five additional individuals. The new colony grows faster and larger as the temperature of the water rises.

Since all individual byrozoans possess both male and female reproductive organs, they are also able to reproduce sexually. Sperm is released into the water and is taken up by other individuals via their feeding fans. Many of the sperm will be received by individuals within the same colony, but some will spread farther abroad on water currents. Most species brood their large eggs inside their tubes. Developing larvae possess swimming equipment – whip-like hairs or rows of cilia. When released into the water column, the young bryozoans will migrate before settling to form a new colony. 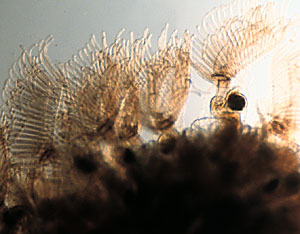 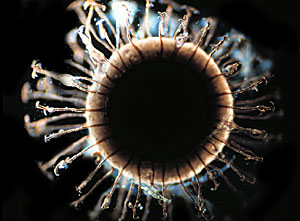