The Wolf and the Caribou

According to the textbooks, a wolf is a hunter, an animal of prey. But the Inuit, the people of the North, take a different view of it. They have their own idea of why the wolf was created. In the beginning – so the legend says – there was a man and a woman, nothing else on the Earth walked or swam or flew. And so the woman dug a big hole in the ground and she started fishing in it. And she pulled out all of the animals. The last animal she pulled out was the caribou. The woman set the caribou free and ordered it to multiply. And soon the land was full of them. And the people lived well and they were happy. But the hunters only killed those caribou that were big and strong. And soon all that was left were the weak and the sick. And the people began to starve. And so the woman had to make magic again, and this time she called Amorak, the spirit of the wolf, to winnow out the weak and the sick, so that the herd would once again be strong. The people realized that the caribou and the wolf were one, for although the caribou feeds the wolf, it is the wolf that keeps the caribou strong. 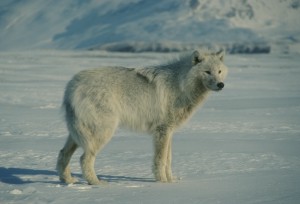