Dip a net into the muck at a bottom of an arctic pond, and you will likely capture a mass of small wrigglers. Their abundance is staggering, forming the basis of freshwater foodwebs and the main attraction for the Arctic’s immense migratory bird populations. These “wrigglers” are larval flies, the most dominant group of invertebrates in the Arctic, comprising over 50% of all insect species in some places. Of the more than 720 species of flies that have been described from the Arctic, approximately 150 reach the High Arctic.

Many of the best represented families – most notably the non-biting midges (Chironomidae), the crane flies (Tipulidae), the mosquitoes (Culicidae), and the blackflies (Simuliidae) – spend their larval stages in lakes and rivers. While the larvae are aquatic, all take to the air as adults, often with great acrobatic skill. Days with good flying weather – air temperatures that are not too cold and winds that are not too strong – are not common, so the adults of some Arctic flies have given up flying altogether. They crawl along the ground in search of food, mates, and sites to lay their eggs. Many Arctic flies have short lifespans, feeding sparsely, then mating and laying eggs near or in tundra ponds and rivers.

Fly larvae are distinguished from other aquatic insect larvae by their lack of jointed legs. While some species have fleshy projections that allow them to crawl along the bottom, others wriggle to get around and some remain attached to rocks or other objects until they mature.

The few species of mosquitoes that inhabit the Arctic are abundant and widespread. Two in particular, Aedes impiger and A. nigripes, are not only dominant throughout the southern Arctic, but breed as far north as the High Arctic. Mosquito eggs are laid near the margins of lakes, ponds, or puddles, and the larvae live in these waters, with their tails in the air, taking up oxygen. These “wrigglers” filter particles out of the water and feed on them. The adults are small, delicate flies with long legs; males feed on nectar, or not at all, while females supplement their diet with a meal of blood. Using straw-like mouthparts, female mosquitoes can consume 1–5 times their body weight in blood, and they use this excellent source of protein to develop their eggs. In the High Arctic, blood supplies are scarce, and the resident mosquitoes have the ability to develop their eggs without a blood meal. Instead, they use protein acquired during their larval stage. When they get the chance, High Arctic mosquitoes still bite birds and mammals – including humans – and one study has shown that musk-ox are the most likely victims on Ellesmere Island.

Blackflies are smaller than mosquitoes, with more compact bodies. Their larvae are specialized for life in fast-flowing water; they anchor themselves to rocks at the bottom of rivers with a ring of hooks and silk safety ropes. Thus positioned, they absorb oxygen through their exoskeleton, and sweep particles from the water with their mouth brushes. When mature, the adults ride to the surface in a bubble, and take to the wing. Both males and females feed on nectar, but females also use their saw-like mouthparts to slice open the skin of birds or mammals and lap up the blood that seeps out. Most blackfly species do not have ranges that extend far into the tundra, but the ones that do mature their eggs without a blood meal. Consequently, the residents of the High Arctic are spared annoyance from biting blackflies.

Both groups of flies also have representatives that have adapted to the harsh arctic environment by doing away with flight in order to find mates. Instead, these species walk across the tundra in search of a partner, avoiding the winds.

There are several families of flies that bear the common name of midge – all are characterized by their small size and delicate body form with longish legs and wings. The most important of these families is the Chironomidae, the non-biting midges, with over 140 species recognized from Arctic Canada. In the harshest areas of the Arctic, these flies comprise 50% of all insect species! Most species have strictly aquatic larvae, but a few species occupy an unusual, moist environment – beneath piles of musk-ox dung! Their aquatic larvae are worm-like, with small heads, and move with whip-like movements. Some species are called bloodworms, a reference to their red colour which indicates the presence of haemoglobin, an oxygen-carrying protein. Most chironomid larvae are consumers of detritus, but some eat algae and a few are predacious. Many arctic species are quite long-lived, surviving through the freezing and thawing of Arctic ponds and lakes for upward of six years, then taking flight in their adult form for just a few weeks. The adults of some species lack mouthparts altogether and do not feed.
Midges are extremely important in Arctic ecosystems. For example, midge larvae are the staple food for arctic charr in High Arctic lakes, as well as for numerous birds, especially waders. Some adult midges are important pollinators, and they occur in such abundance that they also form the lion’s share of the diet of spiders and other invertebrate predators.

Besides mosquitoes, blackflies, and non-biting midges, there are 29 other families of Arctic flies, some of which are aquatic. In particular, crane flies, Tipulidae, are abundant in terms of both numbers of species and individuals. Forty-two species inhabit the Canadian Arctic, and four of these range into the High Arctic. Crane flies are large and conspicuous with extraordinarily long legs as adults. They resemble giant mosquitoes, and so are also known as mosquito hawks. The adults lack mouthparts and, consequently, never eat. Their larvae have varied dietary regimes, with some species feeding on plants and others on dead material. Those in the genus Pedicia, one of the more common polar groups, are predacious. Both life stages are an important food item for birds, comprising virtually the entire diet for sandpipers and phalaropes during the nesting period.
Another long-legged family of flies with aquatic larvae, the danceflies (Empididae), is so named because the males of most species assemble in swarms. Females entering the swarm choose a mate, sometimes based on the quality of a gift – generally a dead fly.

There are also a few Arctic marsh flies (Sciomyzidae) that occur along the shorelines of tundra ponds and wetlands, although none of these occur in the High Arctic. Marsh flies look a little bit like house flies, with narrower abdomens and smaller eyes. Usually yellow or brown, marsh fly larvae are specialist predators, or parasites, of snails. 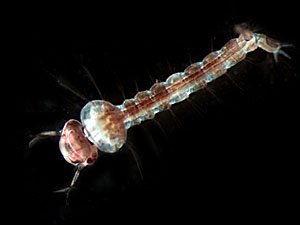 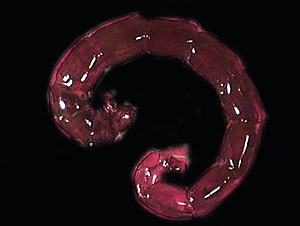